The Iranian Students' News Agency reports that Persian sturgeon (Acipenser persicus) has been successfully produced in a caviar farm by Iranian scientists.

Until recently, researchers had been able to farm the valuable delicacy from several varieties of fish including Beluga, Russian sturgeon and Australian sturgeon. 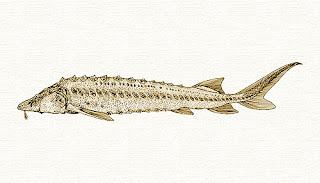 Although more than 20 countries harvest farmed caviar, Iran is the only producer of caviar from the Persian sturgeon. The lone fish is among the 27 recorded in the world bearing the country's name. Persian sturgeon is considered by the Iranians to be the world's second finest caviar, after Beluga.  The decision to produce caviar from farmed sturgeon is a sign of the Caspian Sea's on-going problems with pollution and over fishing and a response to the dwindling supply of the Caspian Sturgeon. The overfishing of sturgeon has driven the fish to the brink of extinction.
at 9:57 AM