What to Garnish Caviar With!
As with many delicacy, caviar can be coupled with various different garnishes. A garnish is simply a flavor enhancer that is meant to highlight the main dish it enhances. When using a garnish with caviar, remember that the point of the garnish is to bring out the sophisticated flavors of caviar, not to overwhelm the caviar and take away from its natural taste. That being said, the following is a list of garnishes that can be used with caviar, followed by the "Traditional" method of eating caviar.

Garnishes that Can Be Used With Caviar: 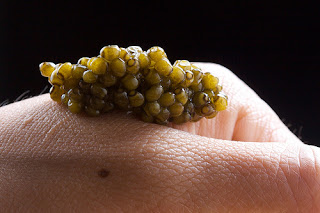 The "Traditional" Method of Eating Caviar:

Simple, none of the above. Traditionalists love caviar for the taste of caviar itself. They view garnishes as defeating the purpose of eating caviar in the first place. Simply take a pearl spoon, place in caviar tin, scoop, apply to hand between thumb and index finger, place in mouth, and repeat.
at 8:52 PM 258 comments:

Email ThisBlogThis!Share to TwitterShare to FacebookShare to Pinterest
Labels: Caviar Accompaniments, Caviar Garnish, How to Eat Caviar, What to add to Caviar, What to eat caviar with, What to Garnish Caviar With

International Flights and Travelling with Caviar

The U.S. Fish and Wildlife Service (FWS) has specific laws for Caviar and amounts passengers can carry when on International flights. These regulations were enacted to protect Caviar as most caviar originates from Sturgeon and Paddlefish, both of which are considered Protected Endangered Species under U.S. laws.


General Regulation of Importing Caviar:
In general, the importation of caviar, a product of an endangered species, is regulated and protected under the Convention on International Trade in Endangered Species (CITES). CITES regulated importation of caviar into the U.S. by requiring specific permits in order to protect selected species. Without proper permit documentation, caviar cannot be imported into the U.S.

Exception When Importing Caviar for Personal Use:
A CITES permit is not required if an individual is carrying (on their person or suitcase) caviar intended for personal use. Meaning this caviar is not to be sold or enter interstate commerce. The Maximum amount permitted per person is 125 grams of caviar. Which translates to roughly 4.5 ounces. This exception applies to passengers on Airlines as well as Cruise Ships.

Exception to the Exception - Beluga Caviar:
Regardless of the personal use exception, no amount of Beluga Caviar can be imported or exported to or from the U.S. for any use. As a "threatened" species, there is an all out moratorium on Beluga Caviar for all CITES member nations, including the U.S.

For more Information, check out the Fish and Wildlife Service's Caviar Passengers Fact Sheet and Guide.
at 6:03 PM 70 comments: 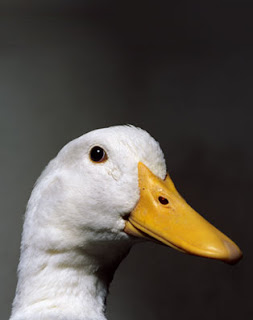 Hudson Valley Foie Gras, a California company that processes over 250,000 ducks yearly have been considering filing a lawsuit challenging the California ban on the grounds that their practices on ducks are being singled-out as compared to similar practices on cattle of chicken occurring regularly throughout California and the United States.
at 11:57 AM 96 comments: 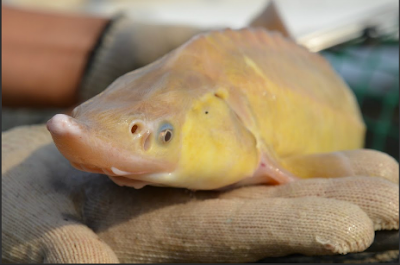 Check out this great video and write-up about a South Korean Caviar Farm that has been raising sturgeon in their facilities including albino sturgeon.

Although farm-raised, prices of the albino sturgeon from South Korea are sure to fetch astronomical prices. Would love to try some of their products, and perhaps give them a visit!
at 9:39 PM 209 comments:

Sure, the term "caviar" is used quite commonly, and most know it is the processed roe of fish, but what makes fish eggs "caviar", and not just fish eggs. Can any fish egg be made into caviar? What does Caviar mean?

Traditional Definition of Caviar:
The actual word "caviar" was introduced into English in the 16th century. It is believed that it came from French and Italian influence, who inherited the word from the Turkish "havyar". The source of the Turkish "havyar" is apparently an Iranian dialect for the word "egg" in Farcy, "khayah". So to make put it in Kevin Bacon degrees of separation terms:

Modern Day Definition of Caviar:
Today, there are numerous types of "caviar" around the world. Caviar is no longer limited to the Caspian Sea as there are hundreds of farms around the world breading and raising various different types of fish (Sturgeon and Non-Sturgeon) to ultimately produce caviar.

Thus the definition of caviar today has been drastically expanded to include almost all types of salted fish roe, including Sturgeon from all parts of the world, including Salmon, Paddlefish, Whitefish, Lumpfish, and others.

So what does "Caviar" really mean?

Depends on if you are a traditionalist or definitional expansionist. Within the caviar community, the definition is incredibly subjective. Some of our customers define caviar as any processed fish roe (expansionist), while others see it as only those fish roe originating from the Sturgeon Species, including the farmed variety (traditionalist). Still others see caviar as only those eggs processed from the three main Sturgeon (Beluga, Osetra, Sevruga) found in the Caspian Sea (true traditionalist).
at 3:29 PM 119 comments: